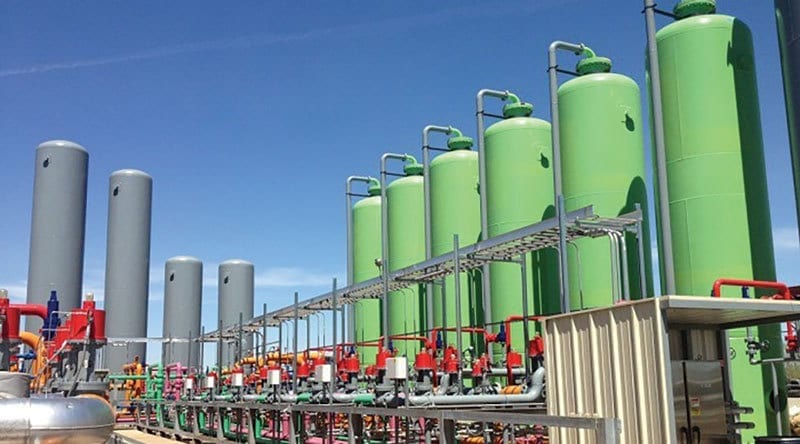 In states with a Low Carbon Fuel Standard program in place, like California, that figure is well over 90%.  And an increasing number of natural gas fuelers are pledging to dispense 100% RNG at their stations within the next decade as more and more biomethane becomes available and new production facilities come on line.

Over the last five years, RNG use as a transportation fuel has increased 577%, displacing over seven million tons of carbon dioxide equivalent (CO2e).

Over the last five years, RNG use as a transportation fuel has increased 577%, displacing over seven million tons of carbon dioxide equivalent (CO2e).  Put into perspective, RNG motor fuel is:

Captured above ground from organic material in agricultural, wastewater, landfill or food waste, RNG produces net carbon-neutral and even net carbon-negative results when fueling on-road vehicles like short- and long-haul trucks, transit buses, and refuse and recycling collection vehicles.  RNG fuel in 2018 had an EER-adjusted carbon intensity as low as -303.30 according to the California Air Resources Board.  By comparison, California’s electricity grid rated between 25.0 and 38.95.[3]

Proven and affordable natural gas vehicle technology is over 90% cleaner than federal EPA nitrogen oxide (NOx) emission standards.  And when those American-made heavy-duty trucks and buses are fueled with renewable natural gas, they are up to 125% cleaner than the cleanest diesel technology in terms of carbon emissions. RNG-fueled vehicles are the most immediate and cost-effective heavy-duty option when seeking to reduce emissions and combat climate change.

Unlike other biofuels, the production of renewable natural gas doesn’t require large amounts of land to be clear cut and dedicated to, for instance, soybean production.  It doesn’t displace food production or require significant volumes of water or nitrogen-based fertilizer to be used in its creation.

The total number of North American biomethane production facilities has increased more than two-and-a-half times in the past five years.

The total number of North American biomethane production facilities has increased more than two-and-a-half times in the past five years; there are almost 100 domestic biomethane production facilities in use today.  While 34 US states produce geologic natural gas, the potential to produce renewable natural gas exists in every US state and the District of Columbia by taking the problem of fugitive methane gas created from organic waste, capturing it, then using it to fuel traditionally heavy-carbon freight and transit transportation applications.

Medium- and heavy-duty natural gas vehicles are proven, scalable, and affordable.  NGVs fueled with biomethane are the most impactful commercially-available alternative fueled vehicles today, eliminating virtually all pollutant and toxic emissions and creating a clean climate product with no carbon footprint.

Find out more about RNG’s transportation impact and NGVAmerica’s efforts to develop a growing, profitable, and sustainable market for vehicles powered by natural gas or biomethane.