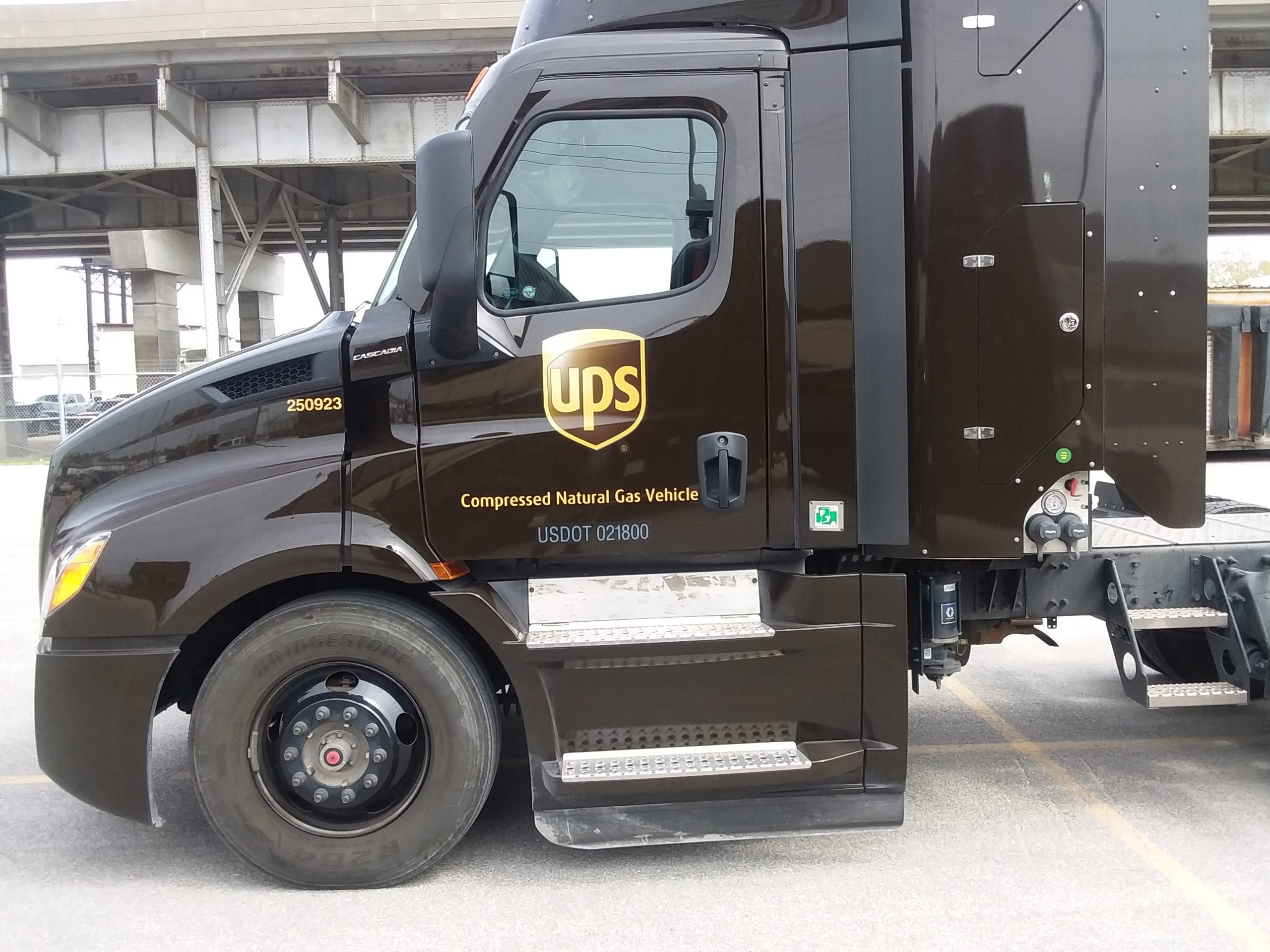 Kansas City Regional Clean Cities is lending a hand with urban clean fuel projects for UPS in Kansas, Missouri, Iowa and Nebraska. We’ll try and keep the superlatives to a minimum: UPS is the biggest for-hire freight trucking company in North America—by revenue ($71.9 billion in 2019), by income ($4.8 billion) and by employee count (481,000). FedEx is a close second, but from there, it’s a long way down to the next in line. XPO Logistics, ranked #3 by Transport Topics, has less than one-quarter the revenue, fewer than one-quarter the employees, and for 2019 had less than one-tenth the income of Big Brown. UPS operates nearly 125,000 vehicles globally. These range from Class 8 tractors to motorcycles, and they handle long-haul freight, cross-town courier deliveries, and everything in between. When a company this big moves towards alternative fuels, it does so in a big way. To date, UPS has embraced propane, hybrid-electric and hydraulic hybrid, ethanol, liquefied natural gas (LNG), compressed natural gas (CNG), and all-electric technologies in different locations and duty cycles. Through 2019, they’d already put more than 10,300 alternative fuel and advanced technology units on the road – not quite ten percent of their global fleet.

UPS is the biggest for-hire freight trucking company in North America, and they have made big moves towards alternative fuels.

The most popular clean fuel in our projects with UPS is compressed natural gas, and the vehicles usually are Class 8 long-haul tractors. Natural gas makes sense in several applications but is particularly suitable for long-haul freight. LNG could be considered, but LNG fueling is still thin on the ground, given infrastructure costs in the low millions. UPS uses both fuels but only has CNG at the two yards where we’ve worked the most with UPS. The vehicles are fixed-route day cab trucks. They operate on an out-and-back basis, averaging about 400 miles per day and returning to base every night, with time-fill and fast-fill fueling on site.

Our work with UPS over the last four years – locally within the Kansas City metro area where 21 diesel tractors were replaced with natural gas models – is possible thanks to the Environmental Protection Agency’s Diesel Emissions Reduction Act (DERA) program. After 15 years, DERA is going strong, and for very good reasons. Diesel emissions are one of the most harmful forms of air pollution. Both NIOSH and CDC classify diesel exhaust as carcinogenic, as does the World Health Organization.  Beyond that, diesel engines produce nitrogen oxide (a key element in smog and harmful ground-level ozone), carbon monoxide and PM 2.5. The latter are particles as small as one-thirtieth the width of a human hair, small enough to directly enter the bloodstream through the lungs. This harms lung function and contributes to bronchitis, lung cancer and heart disease.

Diesel emissions are one of the most harmful forms of air pollution, diesel exhaust is carcinogenic.

And that is the rub – diesel engines are literally the driving force of the global economy. Trucks, container ships, railroad engines, buses, construction equipment – if it’s heavy or heavy-duty, it’s probably diesel. Efficient, powerful and durable, diesel engines can run for decades if well-maintained. They’ve become cleaner over time, particularly after the mandated introduction of ultra-low-sulfur diesel (ULSD) in 2007, but old dirty diesels just keep on going. If you live near major highways, a rail yard or a freight yard, that means living with the health impact of diesel emissions. This very often means major impacts to low-income neighborhoods, communities of color, or other frontline communities. This is why DERA deploys funding to help public, private and government fleets replace old diesel units with new diesel units, or (better yet) with propane, electric or natural gas models. Under the program, participating public or private fleets can receive 25-45% of the costs of replacing older diesel trucks, locomotives, or construction equipment, depending on the type of cleaner fuel options they select.

The new tractors mentioned above are working from two UPS truck yards in Kansas, one in a suburban industrial park in Lenexa, the other in the downtown core in Wyandotte County. While cutting diesel emissions is always a plus, it is the second location that we think will provide the biggest public health benefits. Multiple neighborhoods on the Kansas side – Riverview, Turner, Argentine and Armourdale – are just down the road from the UPS yard. Along with I-35, I-70, I-635 and US Highway 69, these neighborhoods are bordered or transected by two major rail lines, with two rail yards directly across the Kansas River from one another, right next door to these residential areas. The UPS yard sits on the eastern end of this corridor. Along with daily exhaust from all the trucks and trains moving by, or through these neighborhoods, geography is also against residents. Since this is a river valley, it’s prone to inversions – atmospheric conditions that hold pollutants close to the ground. The long-term air quality issues in this area were such that the EPA deployed a network of stationary and mobile air monitoring devices in the Turner, Argentine and Armourdale neighborhoods in the fall of 2017 as part of a two-year study. Though the study found air quality within EPA’s ambient standards for these neighborhoods, asthma admissions for Wyandotte County were twice the statewide rate during 2015-17, and hospital admissions of African-American residents were 80% higher than county-wide rates.

The CNG tractors deployed so far are a step toward improving local air quality through the Kansas City Clean Cities partnership with UPS. Ongoing DERA programs over the next few years will help to replace an additional 13 diesel tractors at the Kansas City yard, for a total of 34 heavy-duty diesel trucks replaced in the area most impacted by diesel pollution. We’re also working through DERA to replace dozens more trucks at other UPS locations in Missouri, Iowa and Nebraska, and with other fleet beneficiaries in the Kansas City metro area. It won’t be an overnight process, but we’re proud to help make a positive environmental impact that will last thanks to these new, cleaner trucks being on the road.